Love is in the air!

Love is in the air with some of our store's favorite Valentines Day staff picks! It's a day you can share with everyone in your life, no matter how close or far away they may be! Happy heart day! 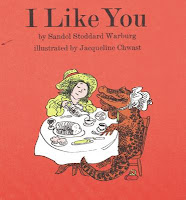 "A small book with a single message amplified and illustrated with cartoon-style drawings."

A perfect little gift for anyone you like! Captures the wonder of the relationship! A classic must read! 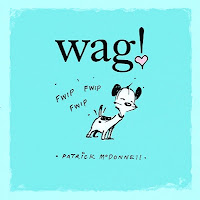 "It seems that everything gets Earl's tail wagging--a bowl of food, a field of flowers, long walks, and belly rubs. But Mooch, Earl's best friend, knows what all of these things have in common: love is what makes Earl's tail wag. Patrick McDonnell, creator of the nationally syndicated comic strip, Mutts, pays an incredibly sweet tribute to his dog in a tale of wiggling and waggling, fwipping and fwapping...and every dog's secret to the joy of life."

One of my favorite books by Patrick mcDonnell! 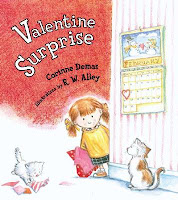 "It’s only a week until Valentine’s Day, and Lily wants to make the perfect heart-shaped valentine for Mommy. But every time she cuts out a heart, it’s either too pointy, too round, or too skinny. As the days go by, Lily tries again and again, and when Valentine’s Day finally arrives, she has a heart for each day of the week! Which one will be the perfect valentine surprise for Mommy?"

The cutest, most endearing book of family love for the season! 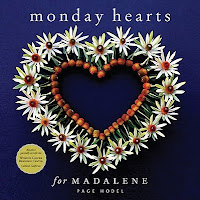 "When a person falls in love, the universe—and everything in it—come vividly alive. It happened to San Francisco artist Page Hodel when she found the love of her life, Madalene Rodriguez. She expressed her devotion in an unusual way: Early every Monday morning, Page would create a heart for Madalene and leave it for her to discover somewhere near her front door. Here are photographs of one hundred of Page’s hearts for Madalene, fashioned from a magical, surprising diversity of materials: acorns and asparagus; berries, buttons, and bungee cord; cardboard, clothespins, corks, and candy corn. True love embraces the world, and Page’s art is testimony to its enduring faith."

MY MISTRESS SPARROW IS DEAD by Jeffery Eugenides

I love anthologies because they are the bite-sized bits of literature that invariably leads me to an author I've not discovered. true, many of these authors are well known, but there are more to explore. The Checkov is excellent, yet the crwoning glory is Alice Munro's beautiful, tender tear-jerker of an ode to lasting love. Share it with someone special!

A beautiful, stunning collection of love letters & poems! Taking the seemingly most ordinary everyday things, the author shares the wonder of this provocative celebration with simple yet brilliant contemplation! Something to share with everyone of significance in your life!

"Pocket Poem" on page 1 is my favorite!

Hope you all have a wonderful Valentines Day!
Posted by Books Inc. Palo Alto at 2:54 PM 1 comment:

February is FULL of beautiful creatures!

Calling all teens! Need a pick me up from those after holiday blues? Then check out these two upcoming YA author events in February! 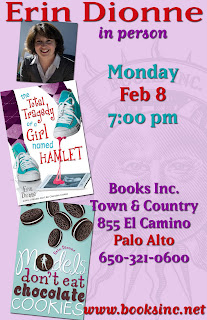 On Monday, February 8th, come meet YA author, Erin Dionne as she regals us with her newest delightful teen novel, "The Total Tragedy of a Girl Named Hamlet."

"In a novel every bit as funny as her debut, "Models Don't Eat Cookies," Dionne has created another eighth grader whose situation is utterly unique--but whose foibles and farces are sure to resound with every girl currently suffering through middle school." 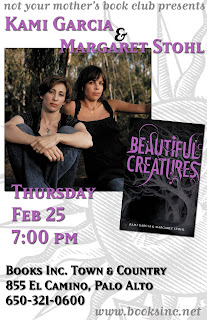 Not Your Mothers Book Club is pleased to present a SPECTACULAR YA author event with widely bestselling authors, Kami Garcia & Margaret Stohl!

Last December, this dynamic team of two hit the ground running with their first smash hit, "Beautiful Creatures," and haven't stopped yet!

"Lena Duchannes is unlike anyone the small Southern town of Gatlin has ever seen, and she's struggling to conceal her power and a curse that has haunted her family for generations. But even within the crumbling graveyards of the forgotten South, a secret cannot stay hidden forever--and one secret could change everything."

Bring yourself & all your fantasy loving friends too! This is going to be a FANTASTIC evening of NYMBC magic!

2010 has just begun & we're celebrating it's beginning by reminiscing on some of our favorite staff picks of 2009! Just because it's the new year doesn't mean you still can't go back through some of these fantastic titles...

Await Your Reply by Dan Chaon

Await Your Reply is a literary masterwork with the momentum of a thriller, an unforgettable novel in which pasts are invented and reinvented and the future is both seductively uncharted and perilously unmoored.

My favorite novel of fall 2009, this is a masterful tale of identity, deception & betrayal as seen through the eyes of three seemingly unconnected pairs of people. I could not put this book down!

A Gate At The Stairs by Lorrie Moore

In this dazzling new novel—Lorrie Moore's first in more than a decade—Moore turns her eye on the anxiety and disconnection of post-9/11 America, on the insidiousness of racism, the blind-sidedness of war, and the recklessness thrust on others in the name of love.

One of the best writers around! Don't miss this coming of age novel by this bestselling author! 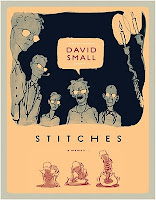 An ideal starting point for anyone curious about graphic novels & a superb treasure for those who already appreciate the genre!

Though Small has crafted a most compelling biographical tale, the true beauty and skill lies in his resounding artwork!

In the winning and utterly original novels Citizen Vince and The Zero, Jess Walter ("a ridiculously talented writer"—New York Times) painted an America all his own: a land of real, flawed, and deeply human characters coping with the anxieties of their times. Now, in his warmest, funniest, and best novel yet, Walter offers a story as real as our own lives: a tale of overstretched accounts, misbegotten schemes, and domestic dreams deferred.

This book is laugh-out-loud-when-your-alone-in-a-public-place funny! It's also a sweet, heartfelt story, terribly sad & not a little outraged! -Eric

The Good Soldiers by David Finkel

I can't say enough good things about this book! It's moving! It's enlightening! It's tragic! Finkel has captured this tale of the men & women who volunteers their lives for a war none of us believed in, in a way that I will remember for quite some time!

The Evolution Of God by Robert Wright

In this sweeping narrative that takes us from the Stone Age to the Information Age, Robert Wright unveils an astonishing discovery: there is a hidden pattern that the great monotheistic faiths have followed as they have evolved.

Though the idea of God seems, of late, so thoroughly refuted by minds like Hitchens & Dawkins amongst others, Wright here lays the foundation for a hopeful theory of religions cultural evolution.

This may be the funniest little book of baking mishaps you will ever read! Trust me! We laughed until we literally cried! 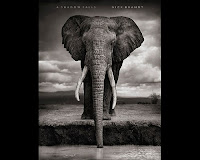 A Shadow Falls by Nick Brandt

From the opening images in A Shadow Falls, of a verdant world filled with multitudes of animals, to the closing images of small bands of creatures moving across a parched, dusty earth, Brandt portrays a mythic Africa struggling against tragic forces.

Nick Brandt is to me the Ansel Adams of African wildlife! A genius far outranking most others in his field! A brilliant feat of photographic artistry! -Colleen