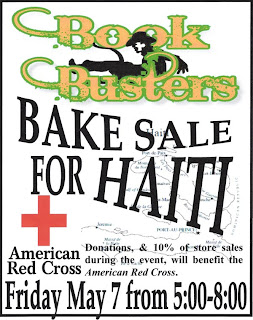 "Book Busters" is hosting a Bake Sale for Haiti! On Friday, May 7th, my gang of book busting club kids will be filling the store with lots of yummy treats like cupcakes, cookies & cakes to raise funds for The American Red Cross in support of their disaster relief work in Haiti! From 5:00pm-8:00pm come on over to our store and meet this fantastic group of local kids! Every dollar counts! Thank you fans for all of your support! Let's get baking!

If you have any questions, please email me @ cross@booksinc.net

Hope to see you & all your friends there!

Guess what?! The Baby-Sitters Club is BACK!! Originally published in 1986, I am thrilled to see this favorite childhood series back in print agian! The 4 girls who we all fell in love with nearly a generation ago have been re-introduced in a brand new Baby-Sitters Club adventure! So whether or not you're new to this best-selling mystery series or already a fan, you will LOVE this group of smart and charming girls! Stay tuned for further new printings of the original series!

The Baby-Sitters Club The Summer Before by Ann Martin

Before there was the Baby-Sitters Club, there were four girls named Kristy Thomas, Mary Anne Spier, Claudia Kishi, and Stacey McGill. As they start the summer before seventh grade (also before they start the BSC), each of them is on the cusp of a big change. Kristy is still hung up on hoping that her father will return to her family. Mary Anne has to prove to her father that she's no longer a little girl who needs hundreds of rules. Claudia is navigating her first major crush on a boy. And Stacey is leaving her entire New York City life behind...
...in order to find new friends in Stoneybrook, Connecticut.

It all began with a great idea ... and the inspiring original story of the Baby-sitters Club is back! Kristy Thomas's brilliant business plan gets off to a great start with the help of Claudia Kishi (vice-president), Mary Anne Spier (secretary), and Stacey McGill (treasurer).

Being a good baby-sitter isn't always easy, and the vice-president of the Baby-Sitters Club, Claudia Kishi, is learning that the hard way. She and the other club members have started getting strange calls on the job. Is it the Phantom Caller, a jewel thief who's been breaking into houses in the area? One thing is certain -- the Club has to take action to protect their kids!

Posted by Books Inc. Palo Alto at 4:34 PM No comments: